What is a CAR?

CAR (Chimeric Antigen Receptor) consists of a single chain variable fragment (scFv) as an ectodomain, a short hinge, a transmembrane domain, and an endodomain with signalling domains derived from CD3ζ and costimulatory molecules (see left and middle figure).  The adoptive transfer of T cells genetically modified to express CARs is emerging as a promising approach for cancer immunotherapy.  Recent clinical trials of adoptive therapy with CAR-T cells targeting CD19 have shown an impressive efficacy in patients with haematologic malignancies, which leads to the expectations that this approach could be extended to include treatment for common epithelial cancers.  However, wider application of CAR-T cell therapy is confronted with the limited availability of surface antigens that are adequately specific for the tumor while sparing the normal cells. 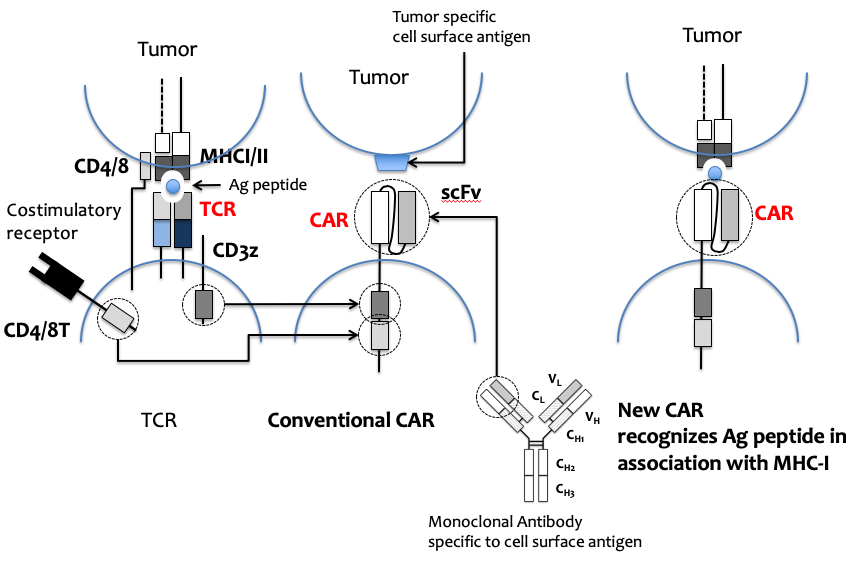 A rich diversity of tumor antigens rather contains intracellulary expressed proteins that act as disease drivers, such as oncogene products or are expressed in tumor cells exclusively or in very limited normal tissues, such as neoantigens or CT antigen, respectively.  Furthermore, recent clinical trials explored the potential of post transfer vaccination to enhance adoptively transferred T cells, which cannot be achieved in cases where T cells re-directed to cell surface antigens.  In these regards, TCR-based targeting approach seems to be more suitable in that it targets peptide in association with MHC derived from intracellular proteins on tumor cells and cross-presented by antigen presenting cells, and thus adoptive cell therapy based on TCR engineered T cells can be boosted by vaccination.  However, a further development of this approach is hampered due to the difficulty in TCR acquisition and the inherent low affinity of isolated TCR for peptide/MHC complex.  Attempts to artificially increase the affinity of isolated TCR in vitro sometimes resulted in the gain of cross-reactivity to endogenous self-peptide/MHC.  To circumvent these constrains, CAR that recognizes peptide/MHC complex have been developed (see right side figure).  Utilizing phage-display library technology, mAb against peptide-MHC complexes could be feasibly isolated entirely in vitro with far efficiency surpassing isolation of TCR.  Studies to prove the efficacy and safety of conventional CAR-T cells that recognize cell surface antigen along with CAR -T cells targeting intracellular antigen peptide associated with MHC Class I are underway. 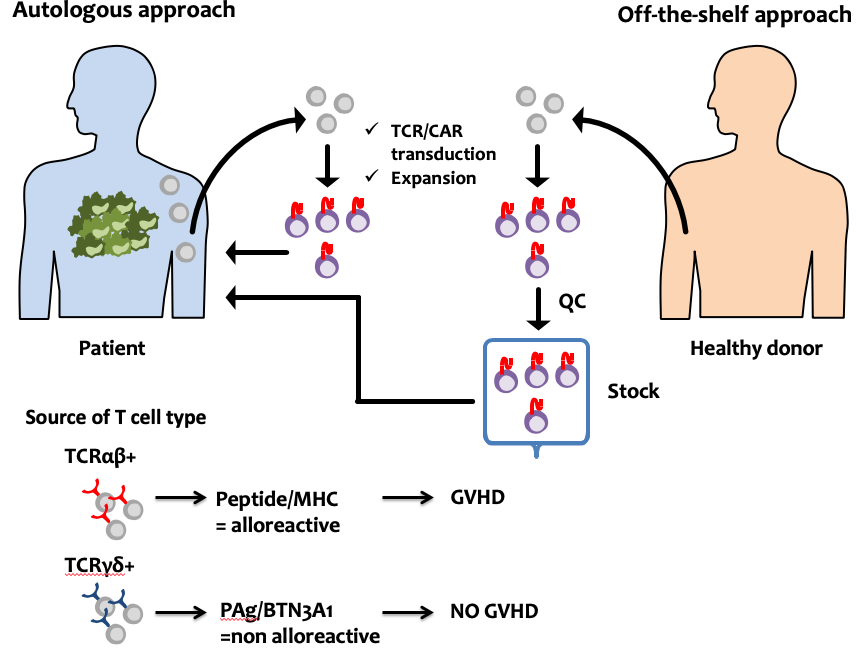