What is an Exosome?

Cells release diverse types of extracellular vesicles (EVs) of both endosome and plasma membrane origin called exosomes (40–150 nm) and microvesicles (100–1000 nm), respectively. Various nucleic acids, including mRNAs and microRNAs (miRNAs), are found in EVs. The miRNAs within EVs can modulate the function of both neighboring cells and distant recipient cells. Tumor cell-derived EVs are involved in cell proliferation and modification of the tumor microenvironment by targeting tumor-associated macrophages (TAMs), myeloid-derived suppressor cells (MDSCs), cancer-associated fibroblasts (CAFs), and bone marrow (BM)-mesenchymal stem cells (MSCs). Tumor stromal MSCs and CAFs promote the formation of a tumor-progression and pre-metastasis niche, which is partly mediated by EVs. Thus, tumor progression seems to be regulated by complicated reciprocal actions between tumor cells and stromal cells, and the factors they release, including EVs. 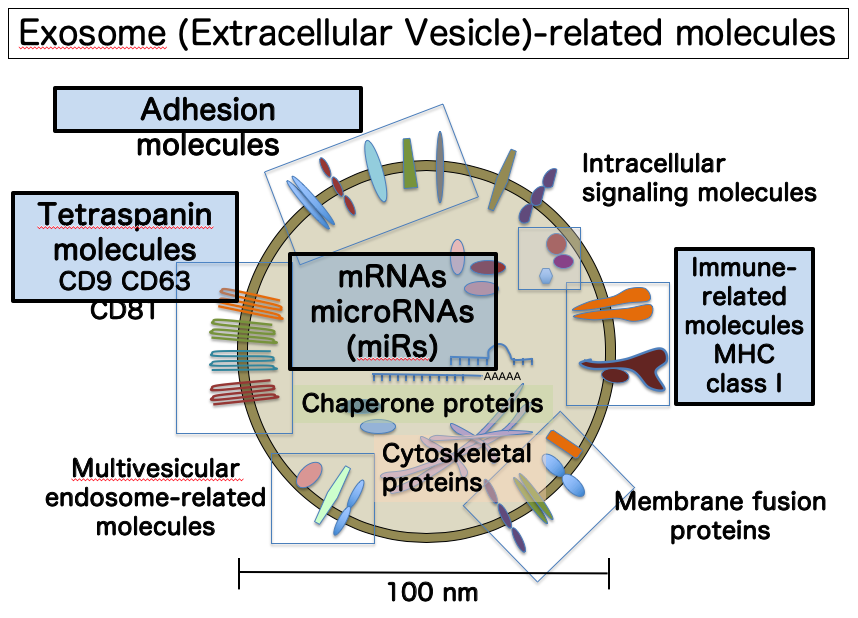 The tumor stroma is formed by various infiltrating and locally differentiated cell populations, including TAMs, MDSCs, dendritic cells (DCs), CAFs, and MSCs, and via tumor angiogenesis, which fills the gaps around the tumor with extracellular matrix proteins. During malignant transformation, tumor cells acquire mesenchymal-like features in a tumor stromal cell-mediated fashion, which enables their metastatic migration into blood vessels and invasive spread through the tumor capsule.

Recently, overcoming tumor invasion and metastasis have become serious concerns for the treatment of refractory tumors, including pancreatic cancers. In a murine study, our group investigated whether CD8+ T cell-derived EVs act as regulators in tumor lesions, focusing on the cell populations in the tumor parenchyma and stroma, and we demonstrated for the first time that EVs from activated CD8+ T cells, but not other lymphocyte populations, play a role as a central attenuator of tumor progression through exosomal miRNA-mediated depletion of mesenchymal tumor stromal cells, including MSCs and CAFs, regardless of antigen specificity. This anti-mesenchymal stromal characteristic of EVs from CD8+ T cells could revolutionize the future treatment of patients with advanced tumors.

Based on our findings, we are currently working on a drug discovery study using CD8+ T cell-released exosomes as an inhibitor of tumor invasion and metastasis as described below. 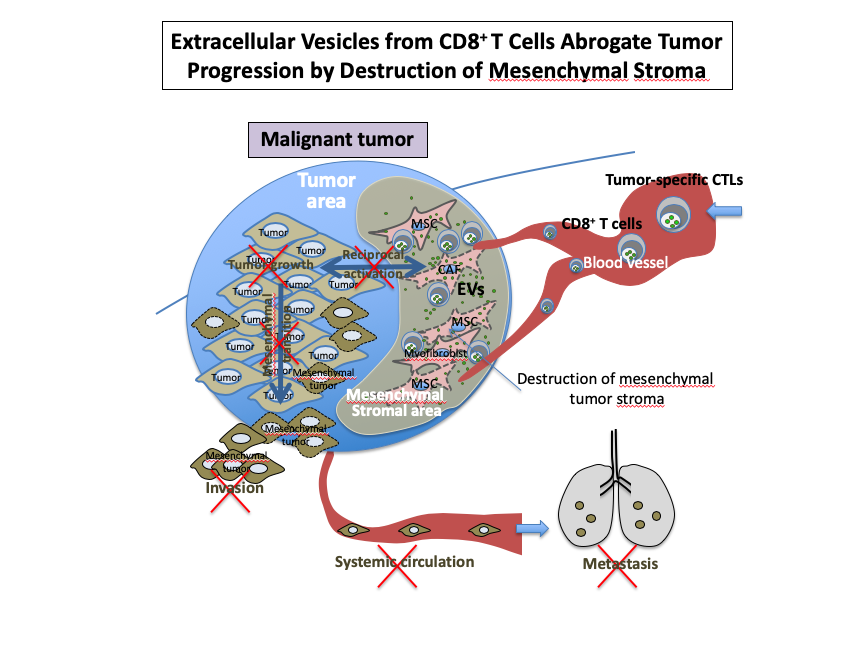